Al-based metallic sandwich foams with in-situ developed face sheets have been developed using powder forging and rolling technique. Different Al-alloys with 03-0.7 wt.% TiH2 are used for this purpose. Al-alloy powders with the mean size in the range of 45 to 80 m are used. The process flow involves blending of powder, canning, powder forging and rolling followed by sintering and final rolling reduction prior to foaming. Foaming quality and size of pores depend on the time and temperature of foaming. The expansion behavior of precursors was estimated by digital recording of the expansion process. The snapshots of the video were taken at different time and the thickness of the snapshots foam pictures were measured in the pixel scale using an imaging software. The initial thickness of the sample in terms of the number of pixels, before foaming, was taken as the reference thickness for that particular sample. the expansion depends upon the thickness of the precursor. A rapid expansion takes place for thin precursor and maximum expansion can go up to 1000% of the original thickness whereas thicker sections could go up to only 700% expansion. The precursor with face sheet could expand to a maximum of 450% increase in thickness. Whereas, the precursors without face sheets could expand up to 1000% increase in thickness. The thickness of precursor plays a determining role in total percentage expansion of a given foamable precursor. The samples with smaller thickness shows higher expansion compared to that with larger precursor thickness.

Due to high energy absorption capacity of metallic foams, these can be used in various applications requiring damping effect. In general, closed cell aluminium alloy foams are made by various processes and face sheets are glued on the machined foam surfaces so as to keep it ready for applications. This does not allow high temperature application of these foams and the tenacity of these glued face sheets would not be good. In the present approach, the technique adopted leads to in-situ development of face sheets with metallurgical bonding. This increases the face sheet stability. The developed foams possess uniform pore size distribution with mean pore size in the range of 3-7 mm. The use of ceramic particles such as SiC and flyash led to highly stable pores and the mean pore size could be achieved in the range of 6-7 mm. The compressive properties of the foams were evaluated for different densities of foams and at different strain rates (0.5-5.0 mm/min). A strong correlation was found between energy absorption and the density of foams. On the average, the energy absorbed for a foam density of 0.5 g/cc for Al-8%Si alloys is 5 MJ/m3.

The process developed in the present investigation for the Aluminium foam sandwich (AFS) circumvents the need for hot pressing/extrusion and rolling of the precursor, which also limits the size of the precursor. In addition, the process involves formation of in-situ face sheets which is generally not possible by the conventional powder metallurgy processes employed in the current industrial practice. It seems from the process route that the number of steps can be easily reduced for cost reduction for the same quality of foams, however, further research work may be necessary for the development of the process where some of the steps may be combined. 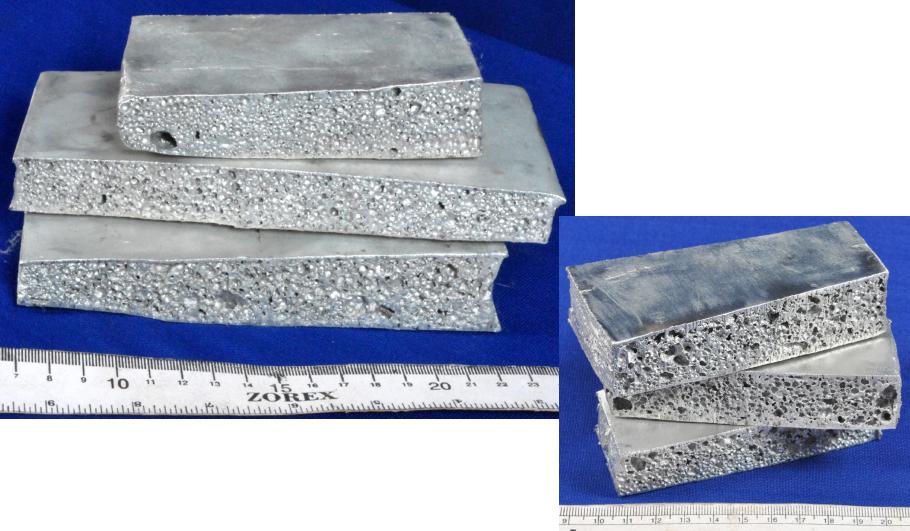